Leave it to me to pick a travel destination that is known for its great seafood dishes when I have a shellfish allergy (great). Fear not, however, for I have not gone without food (of course not, this is Spain and there is no such thing here)! I have been “running away” from places that focus mainly on seafood to stay on the safe side–I know what it’s like to experience an allergic reaction while being away from home and I do not intend to find myself in that situation again. 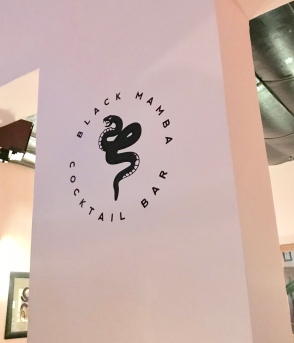 On day one I had dinner at La Buha Restaurant and Bar in La Latina barrio (neighborhood). I was accompanied by Enrique, a Dominican, Jersey-born and Madrid-raised staff member of TOC Hostel Madrid (where I am staying, but more on that later) and Marlen, a Mexican college student and my roommate for a couple of days. Before heading to La Buha we stopped at Black Mamba Cocktail Bar for drinks and tapas! We got to sit and chat with the owner (a Mexican who, after so many years here, now basically has the accent of a born-and-raised Madrileño) who is a friend and former coworker of Enrique’s–he recommended our next restaurant stop: La Buha. These two places had very different vibes but I enjoyed both. 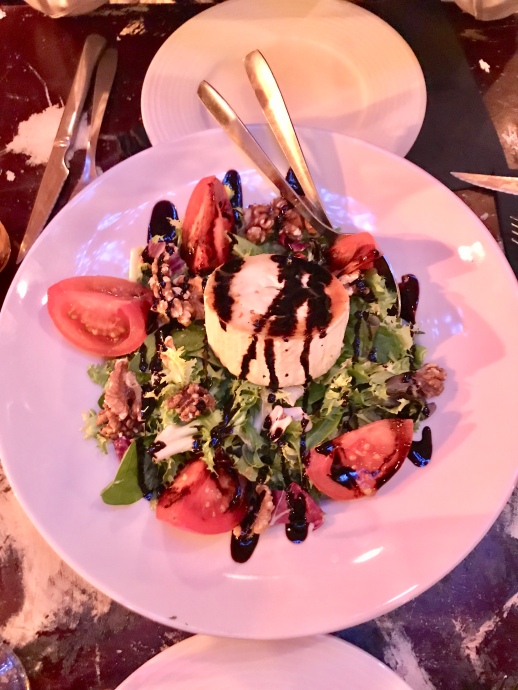 Dinner at La Buha was great! Of course, we started off with more drinks and tapas. My drink of choice is always a red wine and tapas are always a surprise. At La Buha we were served sliced salmon over fresh cream cheese and herbs on toast–this has been the yummiest tapa I have had this week! For dinner we ordered three tostas (essentially, a heavy-topped giant piece of savory toast) and a goat cheese salad to share (between three). My tosta had solomillo ibérico (Iberian steak) and red pepper over brie cheese. The pepper gave the solomillo a sweet taste, which I did not expect but did not mind. The salad was probably my favorite part of the meal.

On Tuesday night I had dinner at Los 4 Robles and joined several others there who were watching the Juventus v. Real Madrid fútbol match (Real Madrid won, which made the night even better). I started off with wine and tapas (chips) and for dinner I had a Montadito de Jamón Ibérico–like a sandwich with Iberian ham and a home-made, crushed tomato topping (this is the only way I break my “allergen” rule… I still play around with tomato). The montadito was great even though I expected the cured ham to have a stronger flavor.

On two occasions I have had churros for breakfast (the first time at Chocolatería San Gines, a 24-hour joint in Madrid, and the second in Salamanca). Churros are fried dough sticks (much like a donut and sometimes bent into a loop) served with a thick hot chocolate for dipping (I tried drinking mine after eating the churros but did not find it appetizing). Unlike the churros I am used to seeing in the states, Spanish churros are not covered in sugar and cinnamon. My other breakfasts at TOC have been pretty consistent: tortilla española (potato and egg omelette that is heavier on potato than egg), zumo de naranja o manzana (either OJ or AJ), a croissant (sometimes chocolate, sometimes plain), and yogurt.

I have a Starbucks right across the street so I still get my coffee fix there as I have not heard any wonders or recommendations for Spanish coffee–yet (yes, this is me asking you for recommendations). I did teach the barista my usual drink at home (as of late) and they had never made it that way (you’re welcome, Spain, now your baristas know how to make a Black & White drink). Side note regarding Starbucks, here in Spain they ask you if you’d like a stronger coffee instead of having you buy extra shots (#appreciate) and they also ask if you want the milk froth left in the cup (I will never agree to that).